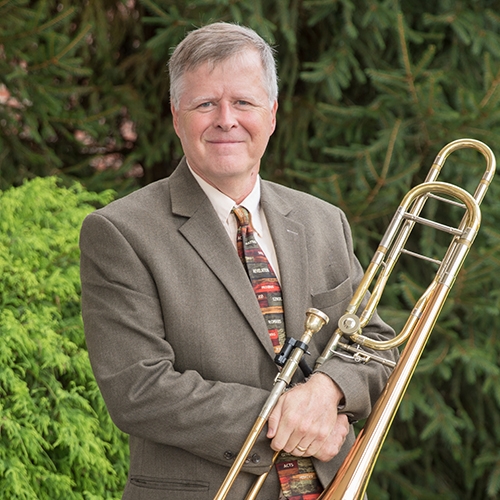 Previously he has served as director of bands at the University of South Dakota, Dickinson State University, North Dakota and, Pfeiffer University in North Carolina.  He is very active as a conductor and clinician and is frequently sought as a guest conductor at state and regional honor bands. Dr. Sudduth has performed professionally with the South Dakota Brass Quintet and the Bismarck-Mandan Symphony Orchestra, Roanoke Opera Company, and the West Shore Symphony Orchestra (MI). He has also served as host and clinician for the Band Director Institute in Vermillion, South Dakota.

Much of his research is devoted to band performance and standards in the secondary school systems. Steven has presented research regarding recruitment and retention techniques at state music education conferences and these have been published nationally.  He has had extensive involvement with the International Trombone Association (ITA), serving as historian, and performing and presenting at various International Trombone Festivals (ITF). Active as a composer, Dr. Sudduth has written numerous compositions and arrangements for band and served as the staff arranger for the National FFA Band. Recently he served as composer in residence for the Alliance High School Wind Ensemble in Alliance, Nebraska. He has won several composition awards, including the Music Teachers National Association (MTNA) National composition contest and he was the 2005 commissioned composer for the State of North Dakota Music Teachers Association.