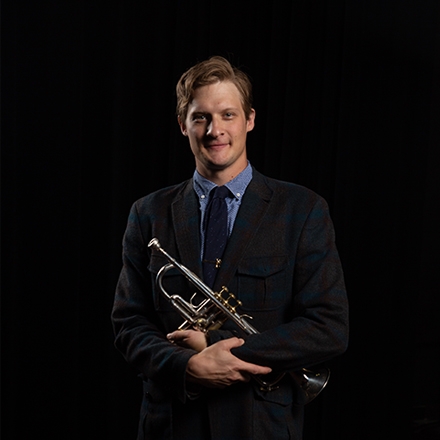 Mr. Jordan teaches private lessons, and assists with the UC Jazz Ensemble. He has been performing, educating, recording, and arranging in the Tennessee area for the past 15 years. At Middle Tennessee State University he earned his scholarship performing in several bands, jazz, and chamber ensembles playing on tours as far away as China. He was a semifinalist in the National Trumpet Competition in 2010. As a certified music educator, Mr. Jordan graduated Magna Cum Laude in 2010 from Middle Tennessee State University receiving an award as an "Outstanding music educator" from the liberal arts department for his work with local schools in various capacities as well as his performances in the area.

He has recorded with several gospel and pop artists in Nashville, including Benita Washington and Michael Hicks for Vergil Stratford. Upon moving to the Knoxville area in 2010 he has worked on a number of local projects including the Black Lillies, the Black Cadillacs, the Dirty Guv’nahs, Devan Jones and the uptown stomp, the Knoxville Jazz Orchestra, Clarence Brown Theater’s productions, and Vance Thompson's Five plus Six.

Joseph received a scholarship to attend the University of Tennessee earning a master’s degree in Jazz performance, where he served in various ensembles and capacities. He has taught at Knox County Schools, Knoxville Christian Youth Bands, private school, private lessons, as well as various after-school programs for underprivileged youth in the Knoxville area including the Joy of Music School and Community School for the Arts. His trumpet students have received numerous scholarships to universities in the Tennessee area. Mr. Jordan taught instrumental music at Gresham Middle School for three years, bringing: chamber ensembles, solo and ensemble, and new instruments, all while assisting and reintroducing jazz band to the curriculum at Knox Central High School.