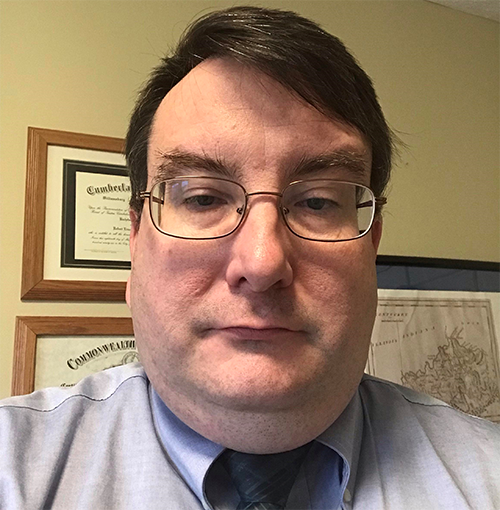 Bio:
Robert E. Stephens, Jr was raised in McCreary County, Kentucky.  Robert graduated from Cumberland College (now University of the Cumberlands), before attending law school at the University of Louisville.

Robert served as Public Defender in the Somerset office after law school.  From 2004-2017, Robert was an Assistant Commonwealth’s Attorney for the 34th Judicial District, which covers both McCreary and Whitley Counties.

Robert has defended or prosecuted hundreds of  felony cases, including numerous homicides, and other complex cases, throughout central and eastern Kentucky. Robert has trained law enforcement, educators, social workers, and other attorneys on criminal law matters, and written for many state and national legal publications on a variety of legal subjects.

Robert’s interests involve modern and historical developments in constitutional law, especially in the areas of criminal law and procedure.

Robert practices state and federal criminal defense, and has focused on criminal trial work throughout his career.

Publications/Presentations/Lectures:
Jury Duty and Citizenship: An Essential Relationship,” published by the Kentucky Association of Criminal Defense Lawyers (KACDL) on May 15, 2019, available at: https://www.kacdl.net/files/kacdl%20news%20may%202019%20revised%20final.pdf

“Due Process Implications of Implied Consent Warnings in English for Non-English Speakers,” published by KACDL on August 31, 2018, available at: https://mailchi.mp/2583c9678406/kacdl-news?e=03f9a3bb9f