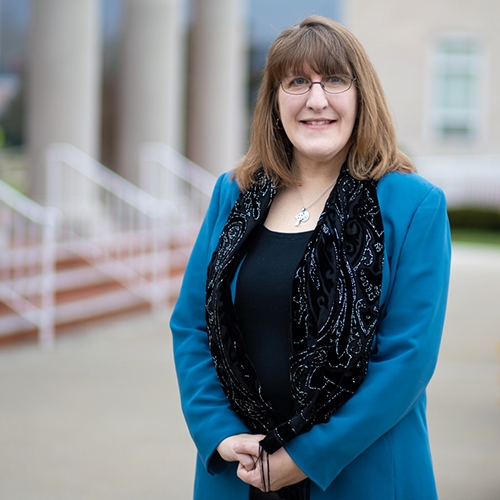 Dr. Laura Dennis teaches French language, literature, and culture at all levels along with selected courses in Spanish. She began her career as an Associate Instructor at Indiana University, then was named Future Faculty Fellow and Lecturer at Indiana University East before coming to what used to be Cumberland College in 2001. Now Chair of the Department of World Languages, she has presented her research on cinema in the classroom, women and aging in literature, feminist geography, and the depiction of international adoption in articles and at conferences from Bowling Green to Montreal, Cincinnati to Vienna. She has also been actively involved in the University’s QEPs on critical thinking and metacognition, including a workshop she co-presented with Leonard Geddes at the 2017 SACSCOC Annual Meeting in Dallas, TX. When not on campus, she spends time with her three kids and many rescue animals; plays piano at her church, Pleasant View United Methodist; and volunteers as blog manager and occasional blogger with the Attachment & Trauma Network (ATN). Her work with ATN, a non-profit agency that aids families and children struggling with early childhood trauma, allows her to combine two of her passions–writing and helping families like her own. An avid reader and writer of creative non-fiction, she has increasingly pushed her writing beyond the bounds of academia, with pieces recently recognized by the Kentucky Women Writers Conference (Honorable Mention, 2017) and Tucson Festival of Books (Finalist, 2019).

"The Promises and Perils of Choosing (a) Language in The Namesake and Apatride" Kentucky Philological Association (KPA) Annual Conference, U Pikeville, Mar 2019

"Does The Class Have a Chinese Exception? Language, Identity, and l’école républicaine as seen by François Bégaudeau" KPA Annual Conference, WKU, Mar 2017

“Apocalyptic Age? The Treatment of la vieillesse in the Work of Annie Ernaux” Kentucky Philological Review 27 (2014)