Should You Go for That Advanced Degree? It Depends! 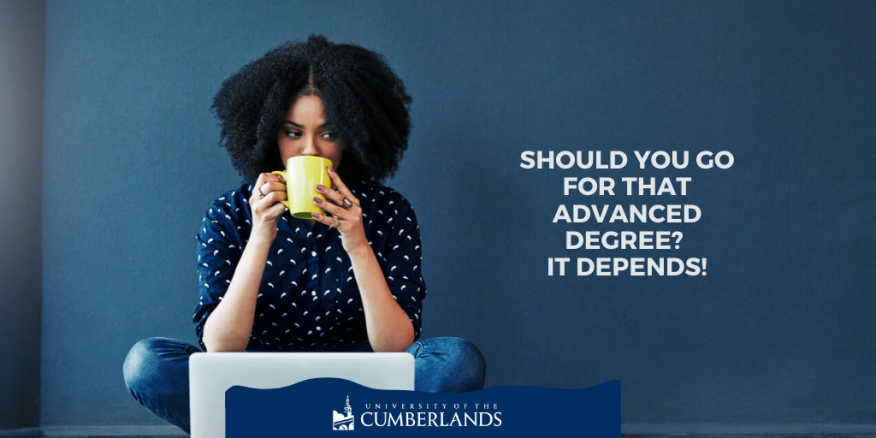 If you’ve just put the effort into earning your undergraduate degree, you might be feeling a mixture of pride over your accomplishment and curiosity over how it will serve you professionally. Maybe you wonder:

The decision to pursue an advanced degree is a very personal one. But there are some important points to consider that could tip the scale in one direction and help clarify the pros and cons.

Great Reasons to Go For That Advanced Degree

1. You boost your earning power

A postgraduate degree is one of the surest ways to increase your earning potential, according to Investopedia. This is especially true if you pursue a program in a high-demand field such as:

The government agrees. According to the U.S. Bureau of Labor Statistics, not only do those with higher levels of education make more money on average, but they also experience a lower unemployment rate. Earning a graduate degree has a proven, positive impact on your income level.

2) You have more career opportunities.

In today’s wildly competitive job market, the best way to stand out from the crowd is with a graduate degree. A 2017 CareerBuilder survey found that 38% of employers have raised their educational requirements over the last five years:

Check out this 2018 article on MarketWatch that states employers are replacing retiring baby boomers with a more educated workforce. “A three-month average finds that 91% of the net increase in jobs held by those at least 25 years old are filled by those with at least a bachelor’s degree, according to data compiled by MarketWatch using the May (2018) jobs report released by the Labor Department,” Steve Goldstein reports.

Graduate school provides you with a large pool of personal, social, and academic connections that can play a huge role in advancing your career. A fellow graduate student might recommend you for the job of your dreams when the company they work for is hiring. Your favorite professor could provide the personal reference that opens doors for you that would have remained closed without the supportive relationship you cultivated.

4. You may enjoy better health and live longer

It might sound incredible, but failing to obtain a high school education could be as damaging to a person’s life as smoking cigarettes, according to a study cited by USA Today College. Using data collected on more than one million people, ages 25 to 85, between 1986 and 2004, researchers found “people who receive higher education outlive those who do not.”

Reasons You Might Want to Pass on That Advanced Degree

1. Time in school might take you out of the full-time job market.

Earning a master’s degree typically requires a two-year commitment, unless you go part-time or enroll in a self-paced online program, which can take even longer. Can you afford to live on wages from a part-time job?

In addition to giving up a full-time salary, you’ll probably go without healthcare benefits and contributions to a retirement plan. You’ll still have all your same living expenses, such as rent, utilities, food, and transportation costs. This might be doable for younger people, but if you’re a mature, established professional with a family, the financial sacrifices could be daunting.

2. Many fields lead to high-paying jobs right out of college.

The right bachelor’s degree lets you earn a nice salary straight out of school so you can start repaying your student loans while you decide if you really do need or want an advanced degree.

While your financial burden might be eased by scholarships and grants, earning an advanced degree is still a costly investment. College Board cites the average tuition and fees per year to earn a master’s degree in 2019-20 as:

Add room and board costs that range from $10,580 to $12,240 per year, and you’re looking at a hefty outlay for that advanced degree. Only you and your trusted advisors can decide if that expenditure is justified by the return on investment.

If you are looking to pursue an undergraduate or graduate degree, look no further than University of the Cumberlands. With professors who have years of real-world experience in the same field they are teaching, very competitive tuition rates, and a sense of honor in everything we do, why look any further? See what UC can do for you by contacting an admissions counselor for more information.